David Summons
posted on 4 months ago — updated on 1 month ago
Scandals
Solar Soccer Club is facing a mutiny of sorts. Several parents within the club have began a petition to boot Bob Reeves, current Chairman & President of Solar Soccer Club...

Bob Reeves is on the HOT SEAT. The issues surround his leadership and vision (or lack thereof), as well as his governance and operation of the Solar Soccer Club.   A credible source left us this tip: 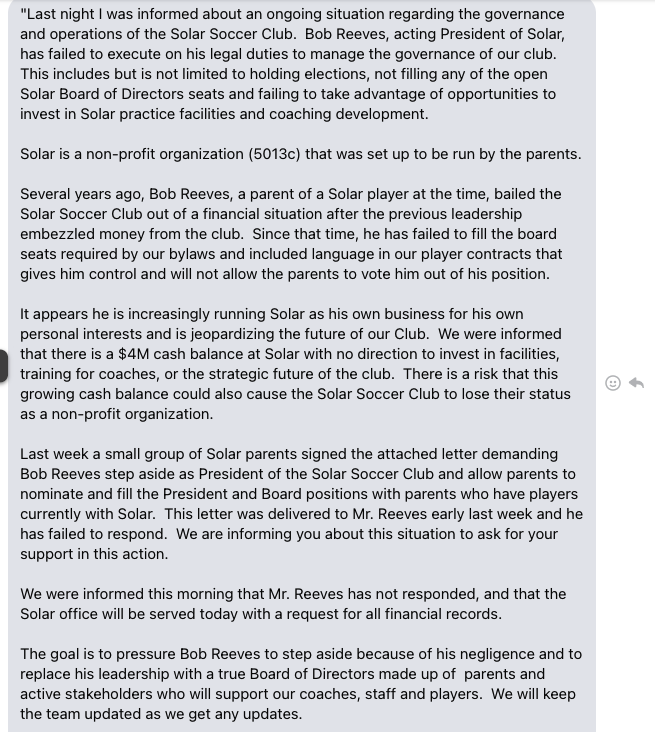 So who the heck is Bob Reeves?

Robert C. Reeves (Bob) is a self-made oil tycoon known internationally as the co-founder of Athlon, INC.  Bob is a very successful businessperson who has been the head of at-least 8 different companies. He holds the position of Chairman & President at Solar Soccer Club.  Allegedly, this is the same guy who reportedly bailed Solar out of financial troubles, years back when the club was experiencing some major issues due to another former leader stealing the clubs funds.   Since that time, allegedly,  he's assumed control over the club, thanks in large part to him buying control over the board.  Several parents are deeply upset at the decisions that have been made by the club with Reeves at the helm, and that frustration has now boiled over into a full on power struggle.

As these internal battles continue, we did get our hands on a letter for more context:

As you can imagine, Reeves' seat is pretty hot at the moment.  It appears the primary issue is about the lack of elections for the Board of Directors.  As always, we'll keep a close eye on this as it progresses. We will always standup with NTX parents, so If you'd like to support the parents of Solar, feel free to join their petition here.