David Summons
posted on 8 months ago — updated on 4 weeks ago
Scandals
Happy New year. Can you imagine 2 of the nations best two teams are caught colluding their way into the final of prestigious tournament? Well, neither could we until... Read More

During the 2020 Surf Cup, we often see some of the best teams in the nation competing on the pitch. Most of these are teams playing at the top level in their respective local areas, and do so with integrity and respect for all involved.  Here in NTX, Kevin Salazar's PST/Dallas Texans youth teams are certainly considered among the best. Kevin, and his braggadocious persona, is both well known and respected for his team's success against both local and national competition. They've been featured multiple times on Univision for their success, and the legacy of travel tournament success is unrivaled locally. His teams are incredibly successful, often dominating the competition enroute to hoisting multiple trophies at each tournament. Nobody can deny this success. However, several sources reached out to us directly, during the final days of 2020, concerning what took place between Salazar's Dallas Texans 2010 boys and Total Futbol Academy (TFA).

So alledgely, the morning of the game, Kevin notified his team parents via TeamSnap that they would throw the game. Instructed them that they would not score any goals against TFA.  PST/Texans and TFA both conspired to "not score any goals" so that both would advance, thus eliminating SanDiego Surf Academy. Basically fixing 10 year old soccer at a national tournament. Our next steps were to confirm the tournament results and the scenario. So we went and looked at the Surf Cup results for the team: 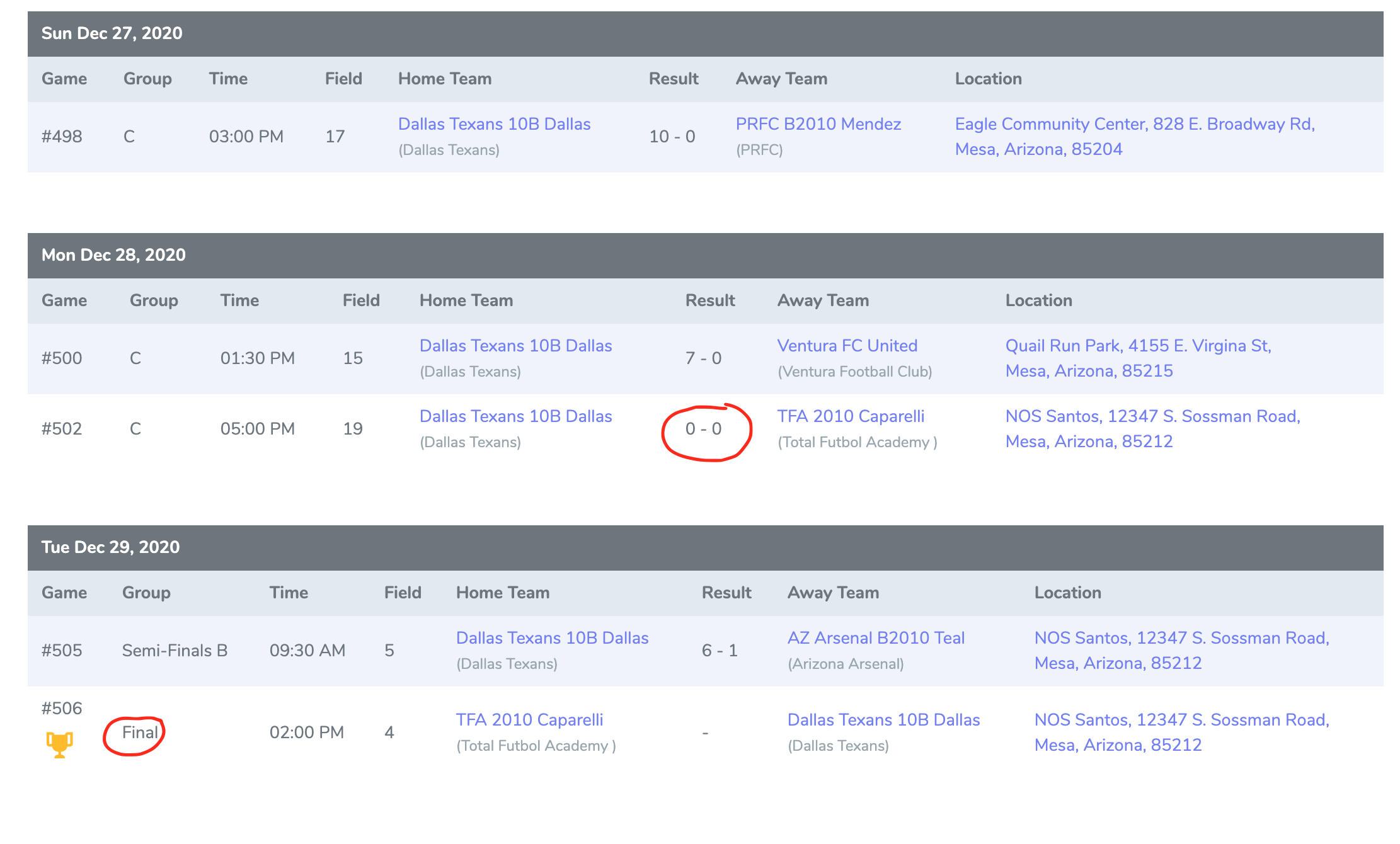 There it is, the nill draw with TFA, which helps both advance and eventually meet up again in the final. The draw removes the risk of losing in the group stage for both. Neither team had clinched a spot in the semis, so the game's importance was tremendous. It appears the coaches might have colluded to stick it to tournament directors, for placing them in the same bracket to begin with.... that's something we'll explore more later.

Over the next few days, our team worked to peice together more evidence to confirm, and I reached out to the initial source for an "in-person" meeting. (We can't just take people's word for it, especially when they are hiding their identity). The source and I met in person, and I was shown screenshots and text messages from parents on the team confirming that it happened, and the aftermath of several parents being upset. The ultimate tragedy is that those 10 year old boys were asked to be complicit and "NOT SCORE".  I think that they are also victims here, as their innocence sacrificed by those coaches.  There will be a follow-up to this one, as even more information is forthcoming. Stay tuned... Happy New Year!