David Summons
posted on 4 months ago — updated on 4 weeks ago
Scandals
With all the coaching movement, it's not unusual to see complete teams transition into new clubs this time of year. However, this story is about how one coach allegedly forged documents to facilitate the team's mid-season move a new club.

This story kicks off due to a concerned parent reaching out to NTSSA several weeks ago with a disturbing tale. The parent's kid was a player on Storm Kernow FC (Rodriguez), a team at the time that was making a midseason transition to another club (DKSC).  Without getting too far down into the rabbit trail, the parent's initial concerns were just that the Coach or Manager didn't bother to notify them about moving their team to a new club. This parent was advised to reach out to NTSSA and file an official complaint due to a rules violation. Why? Well, let’s first take a look at an excerpt taken from the official form required by NTSSA, which should help us understand the rules around name changes better:

(Note: You can access this form and learn more about the rule here)

The parent learned that to facilitate such a change, their signature was likely forged to process the change. Our source was then advised to reach out to NTSSA and file a complaint .

Both Nelson Rodriguez (coach) and Israel Gallegos (manager) were notified that they would appear for a NTSSA disciplinary hearing for allegedly forging that parent's signature on the name change forms. (See email below) 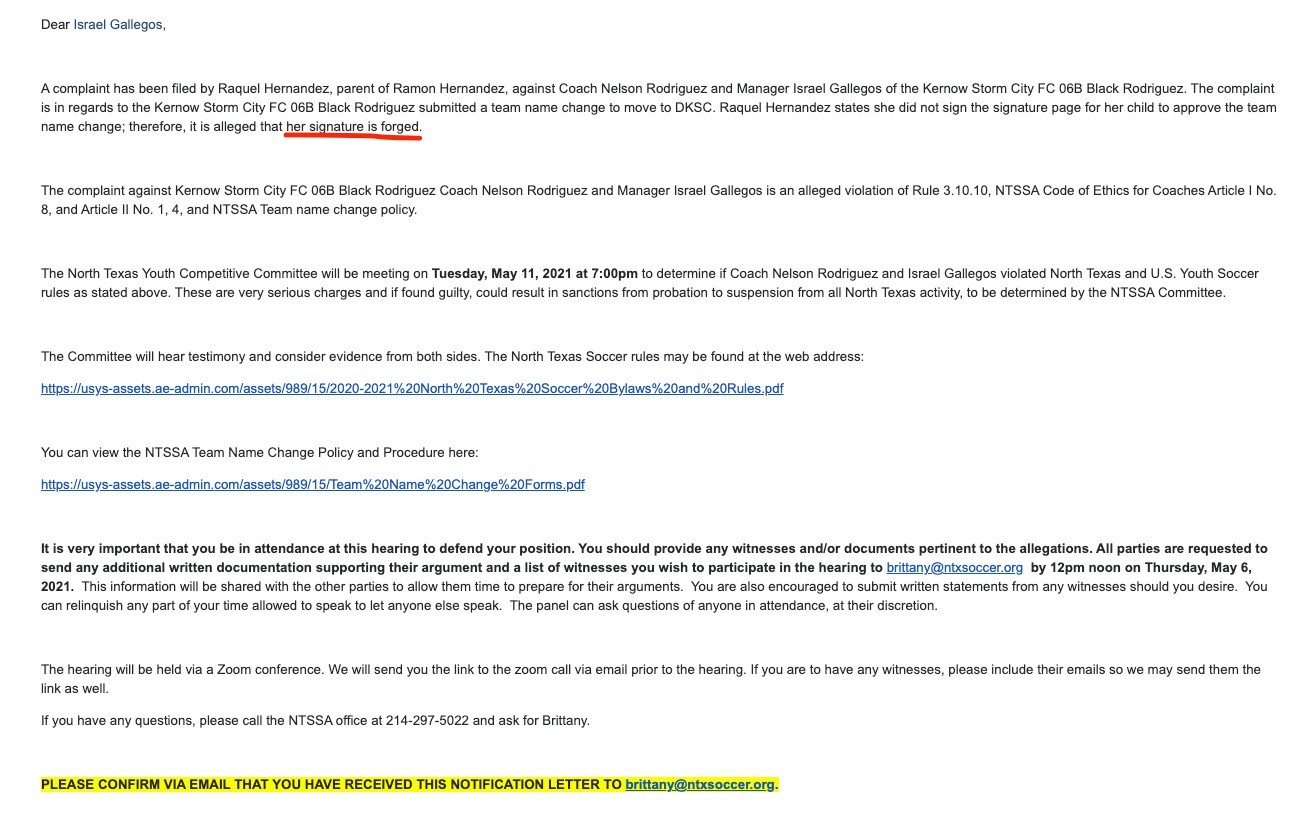 Having received the hearing notice, the team manager, Israel Gallegos, decided to respond:

Team manager responds to the letter... 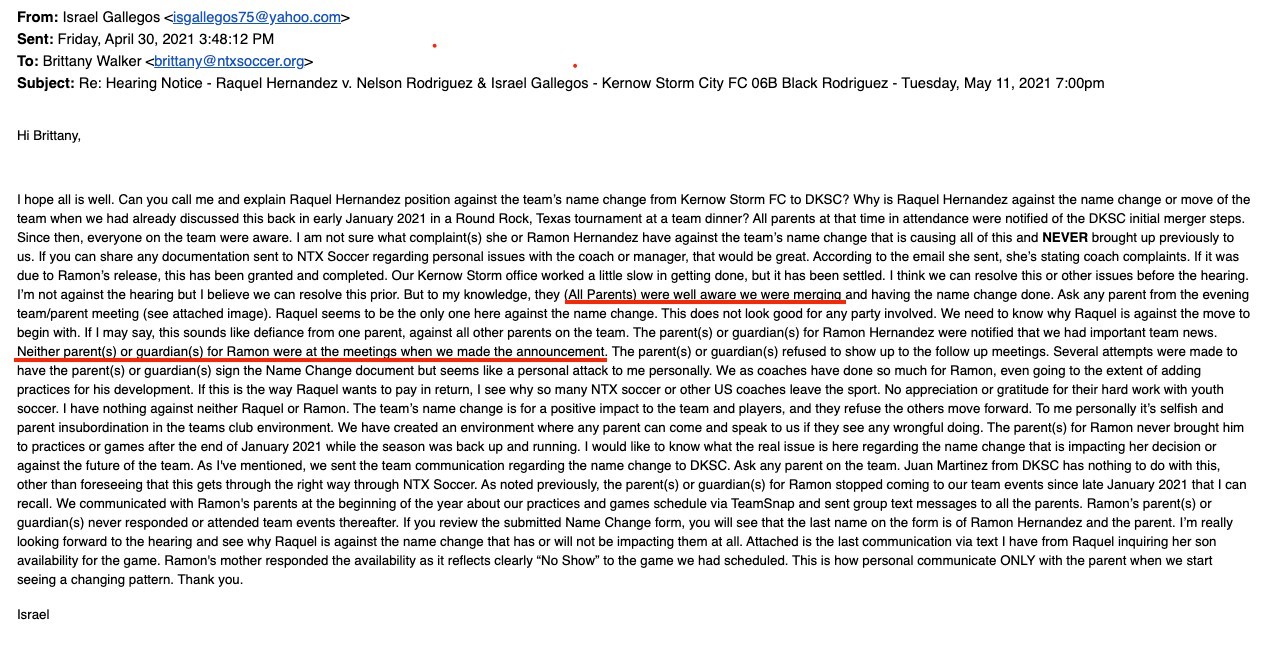 As you can see, Israel's response is both contradictory and concerning. One glaring contradiction found here is where he states: "All parents were aware we were merging". Yet, in a following sentence he admits that the player in question and his parents were never at any of the meetings where the information were shared or discussed. The only thing that is very apparent from reviewing his response, is that he feels the entire complaint is a personal vendetta. However, if someone is forging your signature, why wouldn't it be personal?

So lets take a look at the signatures...

So we next took a look at the document in question, the Team name change agreement form: 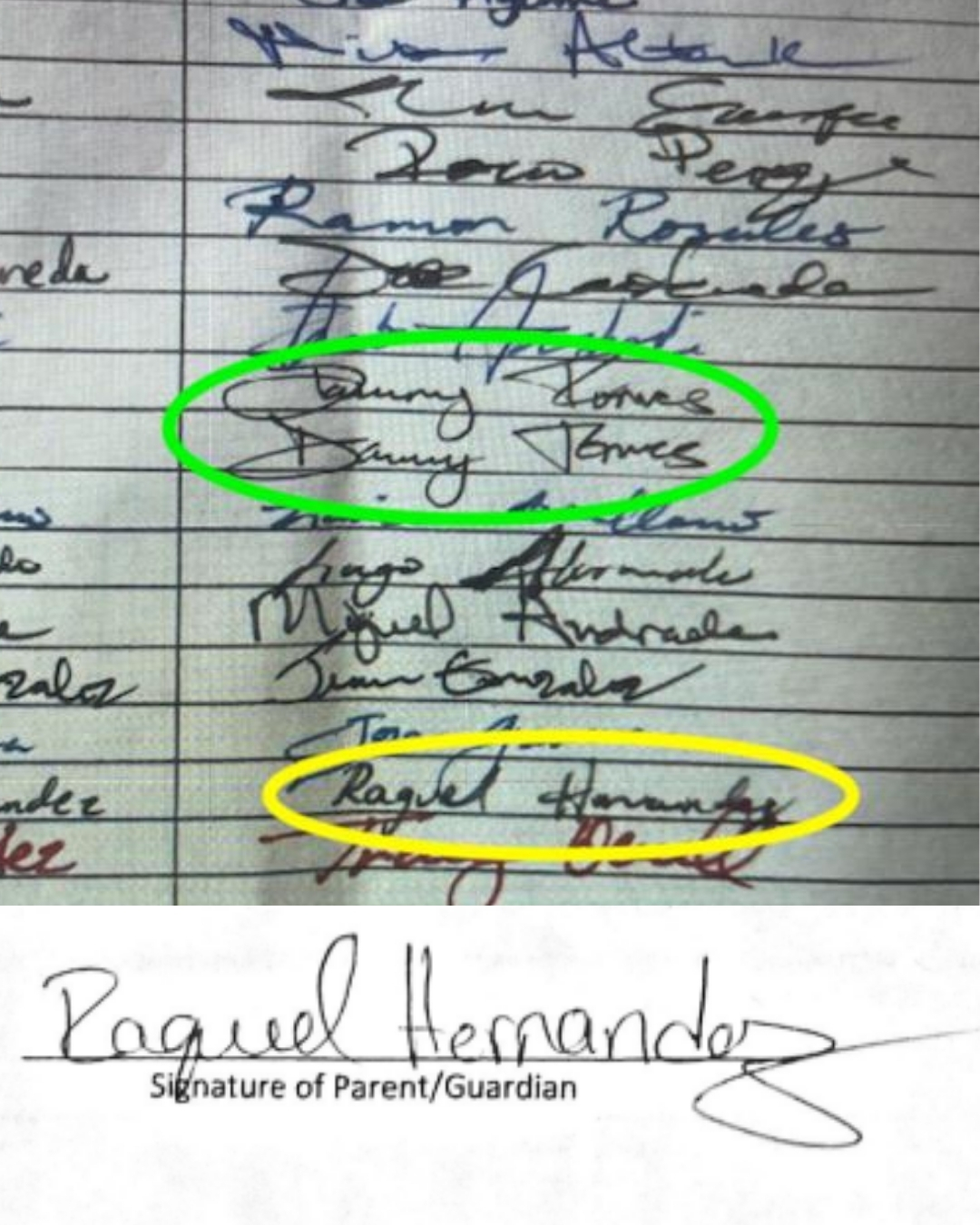 Upon reviewing these signatures ourselves, a few quirks leap out  as suspicious:

Yellow-  Comparing these two signatures of a Raquel, it's very clear that one these weren't signed by the same person. This leaps out to us..

Green- Also these two signature are for siblings on the team. They are both allegedly signed as the same parent (on the same form). However the signatures are clearly very different.

Although we are no experts in handwriting analysis, these quirks seemed to support the parent's complaint of a potential forgery.  After-all, we'd actually contend that multiple signatures are suspect here.

So what did NTSSA hearing committee decide?

The NTSSA hearing took place on 5/11 via zoom. Here is what NTSSA decided:

Both Nelson and Israel were found to be in violation of the NTSSA code of ethics. The coach will only serve a 45 day suspension (until 7/1/21), and then he gets 10 months of probation (until 4/1/22). It's pretty clear that the panel didn't feel that Coach Nelson was directly responsible for the forged signatures. The manager, Israel, will serve a 10-month suspension (until 4/1/22). I'd personally say that this was very light, considering the charge of forgery. Now we wait to see how the club responds to this ruling. Due to the complaint of forgery, NTSSA reversed the club switch, so they are technically still with Storm FC.

As always, we will continue to keep digging and revealing details on this one as we learn more. Tell us what you think? Was this ruling by NTSSA enough? Forgery?