BVB Scandal: BVB South 09B team's grief is compounded by the club's neglect

Scandals News
NTX soccer club fails to provide a coach and/or answers to a struggling team. Yet, somehow, any/all fees are collected without issue. How did we get here?

In January 2020, Coach Tristan Bustillos passed away after a tragic accident. He was a youthful and passionate coach, who was loved by both his players and parents.  Following his passing,  BVB organized a fundraiser to financially support his family, and the club hosted a balloon release to honor his life.

What about his team

Given the circumstances, we naturally assumed that the same generosity and consideration would be extended to his teams.  Unfortunately, over a year later, BVB 09B South has only had their grief compounded by the club's inability to assign a licensed coach. As expected, parent frustration has spilled over and we were contacted with some details of the rollercoaster the team has endured since.

Initially,  Octavio "Tavo" Gomez  (then a parent from another BVB team) volunteered to help train the boys until a more permanent solution could be found by the club.  However, after no solution was found several weeks later, the club decided to designate Tavo as the coach.   In July 2020, Tavo signs the boys to their very first competitive contracts, and things are initially very positive.  According to parents, everything goes well until the team's first tournament. Allegedly, issues arose when team parents raised concerns about Gomez's usage of guest players. This communication breakdown led to Coach Gomez quitting abruptly.  Allegedly Gomez quits citing that he felt both attacked and disrespected by the parents .

Following Tavo's departure, the team's manager (Wilfred "Will" Gomez) stepped in to train/coach the team on an interim basis. Parent frustration has only grown with now months having passed without a new coach.  Many parents feel that BVB's leadership is uninterested in assisting their team. Attempts by the parents to communicate with certain leaders has been both brief and unproductive. For example,  Robie Diffrient, BVB Director of South,  has been contacted by parents concerning a new coach.  Check out how he handles the exchange: 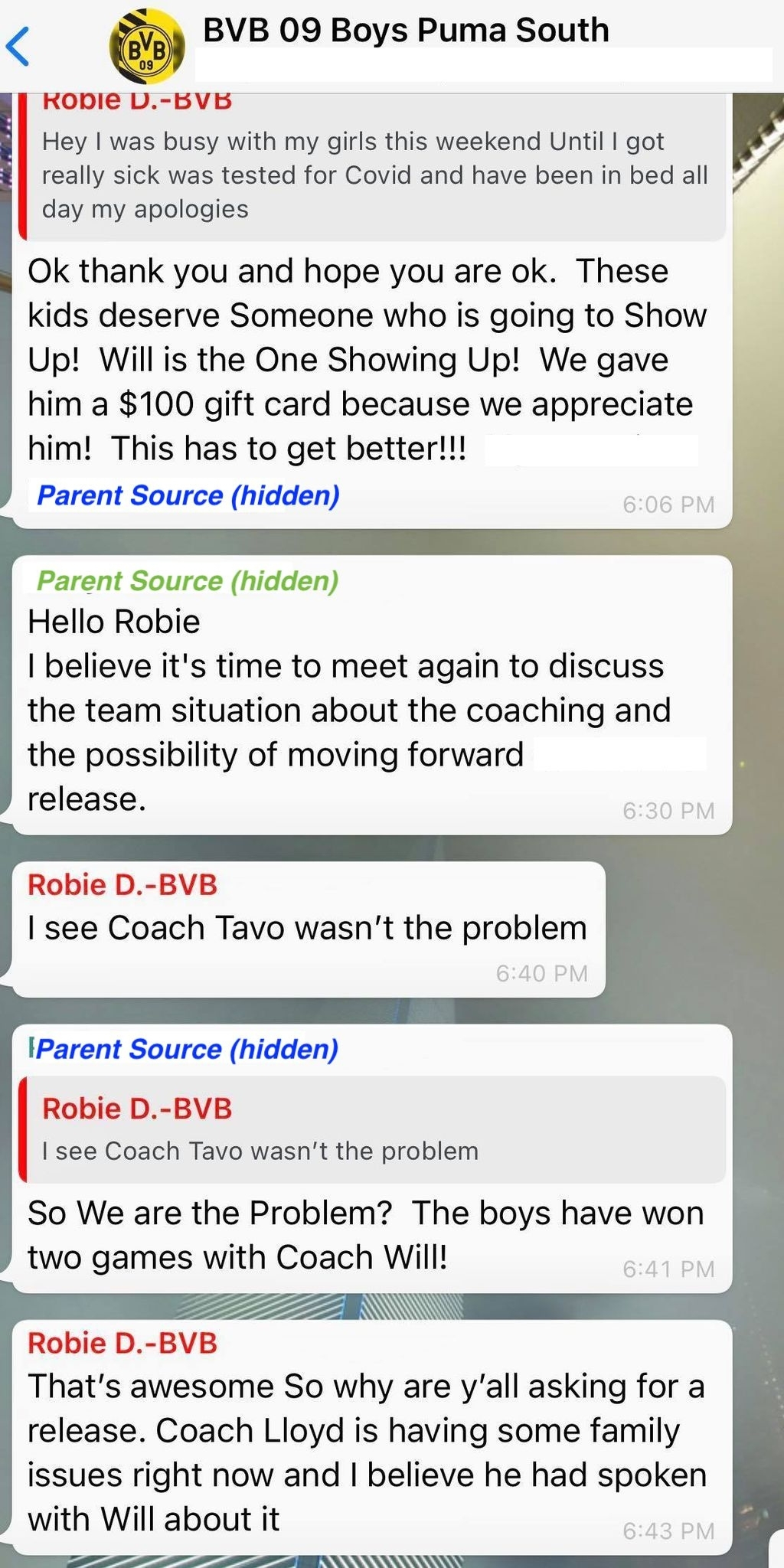 As expected, the parents have all but given up on speaking with Robie concerning this matter. Many have requested releases, only to be rejected. Eventually a few decide to take their concerns higher into the leadership structure, in hopes of getting something done. Will Gomez, manager and acting coach, reached out to Colin Rock, BVB's VP of Soccer Operations and Director of Coaching.  However, via email, Colin Rocke even confirms that he's struggled to contact Robie in a timely manner".

Seeing this gives a window into the parent's frustration. Clearly Robie's not taking his boss' call, are we really to believe that he's following up with frustrated parents?  All of this only raises further speculation that the club's leadership has failed this team.

Compounding the frustration the for the parents, are the select/competitive club fees each parent paid. Despite having no coach, and very little guidance/assistance from the club, BVB collected all the Team/Club fees.    So naturally the parents are asking for their money back or at a minimum a release. We're told that Collin Rocke is still working on finding a resolution, but he was able to confirm the speculation that Tavo Gomez was still receiving the payments for the team. Despite abandoning the team months ago, allegedly Tavo neglected to tell BVB, as he's been collecting the money all this time.   See below the message exchange:

So with this information, it only leaves us with more questions:

How did Collin not know Tavo was being paid for the team? Considering  Robie absolutely knew about Tavo leaving the team months ago (as evident in his TeamSnap exchanges with parents), how could BVB's leadership not know? Why would they allow Tavo to continue being compensated for a team he quit on?

As we consider these things, context is important to remember. Our ultimate goal in sharing this story is to raise awareness of the situation, in hopes that BVB's leadership will present an amicable resolution to the parents of this team. We can all agree that these young boys and their parents have been through more than enough at this point.  So as we hope for the best, we will continue investigating, and will share what we learn.